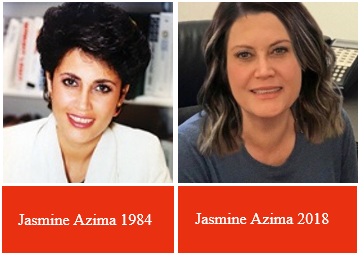 Jasmine Azima founded Jasmine Engineering in December 1984, establishing one of the first woman-owned engineering firms in the state of Texas. Now in its thirty-fifth year of continuous operation, Jasmine Engineering has become a recognized leader in Total Building Commissioning, Project Management, and Program Management services.

Prior to founding Jasmine Engineering, Ms. Azima worked for one of the largest mechanical, electrical,
and plumbing engineering firms in Texas. Starting as an EIT (Engineer in Training) she quickly moved up to the position of CEO. Over her distinguished career Ms. Azima has worked on over 1000 projects representing over $25 billion dollars in consolidated construction cost.

A graduate of the University of Texas at Austin, Jasmine Azima holds a degree in Mechanical Engineering. Ms. Azima is a registered professional engineer (P.E.) and a Certified Commissioning Agent (CxA).

She has won numerous awards over the last three decades. In 1987, Azima was awarded Young Outstanding Woman of America, and in 1990 won Entrepreneur of the Year awarded by Inc. Magazine for Construction and Real Estate.  Ms. Azima has also been honored with the Greater San Antonio All-Star Stars Appreciation Award and YMCA Leadership Award.

Her firm has won an award for “Best Municipal Project” for the City of San Antonio’s Public Safety Headquarters and was recognized as City of San Antonio’s commissioning agent on this new development which achieved LEED silver certification in April 2015. Another of the firm’s projects KCI’s Global Headquarters won the “Best Office Development Award” and is also seeking LEED Certification.

Jasmine’s philosophy is to provide excellent service, before, during and after each project in a cost-effective manner. Every project Jasmine Engineering has undertaken has been completed under budget and on time. Her commitment to quality design and construction, as well as high performance energy efficiency has saved millions of dollars for her clients.

Ms. Azima is a passionate advocate for women seeking careers in engineering. She has mentored many young women over the years and has lectured about the importance of science and mathematics to the future of this country.  Azima has raised and given thousands of dollars to scholarships for young women.

In addition to her dedication to Jasmine Engineering, Inc., Ms. Azima is a community leader with strong involvement in civic organizations such as the San Antonio Downtown Rotary Club, the University Texas at Austin Engineering Foundation Advisory Board, and the Solar San Antonio Board.  In the past she has served on the Board of Directors for the San Antonio Housing Trust and the San Antonio Library Foundation.  Ms. Azima’s commitment to civic engagement is exemplary and she serves as an outstanding role model for women in business.